I've been porting my Visual Studio 2008 C++ application to Visual Studio 2010. One rough spot I've hit is the change in how static library dependencies works. In VS2005 and VS2008, we completely gave up on automated static library dependencies because they only worked in the IDE, not from automated builds with VCBUILD. VS2010 was supposed to fix this problem. (Note that MSBUILD replaces VCBUILD for command line builds in VS2010.)

The problem manifested itself during Batch Build with errors indicating that Debug libraries were being linked into Release builds. For example, these errors happen if you are using STL:

Visual Studio 2010 has multiple ways of specifying dependencies.  The actual effect of each setting and settings' interdependence does not appear to be officially documented, although there is some information at http://msdnrss.thecoderblogs.com/2010/02/16/project-settings-changes-with-vs2010/ and at http://blogs.msdn.com/vcblog/archive/2010/03/02/visual-studio-2010-c-project-upgrade-guide.aspx.

The real action is now on the Framework and References tab in the project properties. This tab used to be exclusively for .Net dependencies, but now it's been expanded for C++ dependencies. When I looked at this page for my project, it looked like this: 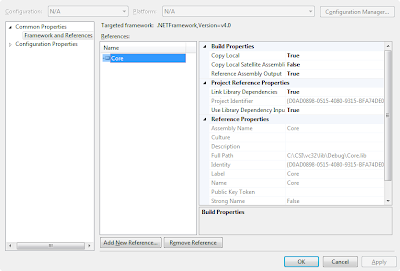 There are a couple of things to notice. First, the Configuration in the top left is grayed out. The Debug/Release settings do not apply to the Framework and References page. Second, you'll notice that the Full Path in the properties on the right points to the Debug build. In other words, the Debug library is always linked, even in the Release build. I've blogged about this problem in the past with .Net libraries, but this is pretty fundamental for C++ libraries.

I first thought that the solution was to set Reference Assembly Output to False. However, after reading the blog of one of the Microsoft Program Managers and following up with him, he said that the Reference Assembly Output option is only for managed libraries and does not do anything for native libraries. He said that the behavior I'm seeing is anamolous and that it shouldn't be happening.

[Update 7/18/2010] I have confirmed that this problem only happens with Batch Build. The problem doesn't happen if you explicitly choose a configuration, nor does the problem happen when running MSBUILD from the command line.

I have opened a bug report on Microsoft Connect. Please vote for it at:
https://connect.microsoft.com/VisualStudio/feedback/details/576146/link-library-dependencies-for-c-does-not-work-with-batch-build

[Update 7/18/2010] Microsoft has reproduced the problem, but has decided not to fix it. If you are reading this, PLEASE let them you that fixing this problem is important to you!
Posted by Jim Beveridge at 12:27 PM