Backing up a 250GB hard drive over 100Mbit Ethernet takes a l..o..n..g time. At 10 megabytes per second (theoretically), that's 600 megabytes per minute, or about eight hours. Compression can cut this number down, but the backup rate is severely constrained by the speed of the link.

In contrast, backing up to an external hard drive over Firewire or USB2 yields about 30MB/second, which brings it down to a manageable 2 1/2 hours.

I decided to take the plunge to Gigabit Ethernet (GigE), something I've been wanting to do for quite a while but was waiting for prices to drop. I brought in a contractor and upgraded my eight year old Cat5 wiring to Cat6. Strictly speaking, GigE is supposed to run over Cat5 for short distances, but I was having difficulties and it wasn't worth taking the time to individually check each wire.

I've learned several things. First, the "jumbo frames" that everyone gets so excited about are useless on a general purpose network. If you turn on jumbo frames, then every device on the network must support them and be set to use the same jumbo frame size. Since devices like printers and Tivos don't support GigE, much less jumbo frames, it means that jumbo frames are a non-starter. The place that jumbo frames *can* be useful is for a dedicated connection between servers or a backbone link.

The primary optimization required for Microsoft Windows 2000 and XP is to update the receive window size in the registry. This change isn't required for Windows Vista because Vista automatically tunes its networking parameters for optimal performance.

You can see what the practical maximum speed of your link is using pcattcp.exe. You run it on a server and on a client and it reports the speed at which it was able to send data. Most importantly, you can set the write buffer size, which allows you to determine the effect of larger buffers. In my case I determined that a 64K buffer provides throughput at 90% of the link capacity.

I still have more research to do, but that's the beginning.

[Update 6/20/2007] After spending far too many hours testing various GigE configurations, I've determined that the original Cat5 wiring was probably working fine. The problems I was having were a combination of the malfunctioning GS108 and a configuration error in my router/switch.

There's a great article at Hardware Secrets that describes how Gigabit Ethernet works and why Cat5 cables are sufficient.
Posted by Jim Beveridge at 11:10 AM No comments:

I finally ordered a 4GB Apacer HT203 and installed it. I also installed the Vista USB patch. The hang problem is now fixed (see my earlier blog entries about ReadyBoost.) I can browse the thumb drive after resuming from sleep without difficulty.

However, ReadyBoost still doesn't work reliably after resuming from Sleep. After the computer wakes up, ReadyBoost works for a while, then mysteriously turns off (as seen by opening the Properties for the drive and looking at the ReadyBoost tab.) If I reenable ReadyBoost, it just turns off again almost immediately.

At this point, I'm only slightly better off than I was before I applied the Vista USB fix. The computer no longer hangs, but ReadyBoost still becomes disabled after resuming from sleep. Doing a "Safe Remove" and then reinserting the thumb drive, even into another port, doesn't help.
Posted by Jim Beveridge at 9:45 PM No comments:

I'm not sure why I keep getting stuck on the littlest things. Ever since I installed Visual Studio 2010, I haven't been able to debug into the C Runtime (CRT) or the MFC source code. This is an operation that never gave me any difficulties in years of using VC6, so it's been quite frustrating. I've made several attempts to fix the problem, but no success until today.

Reproducing the problem is straightforward. Set a breakpoint in one of your MFC message handler functions, go to the Call Stack window, and try to click on any of the functions in mfc80d.dll. Similarly, any attempt to set a breakpoint on an MFC function (such as CWinApp::CWinApp) simply fails to work.

If you look at the Output window, you'll see a message such as this one:

I searched my system for mfc80d.pdb and I found two copies. The first copy is in the symbol cache at c:\cache\mfc80d.i386.pdb\A12C75C3E6A244E3B3BFBE577AB27642e. This file was about 2MB. The second copy of mfc80d.pdb was in c:\windows\symbols\dll. This file was 13.5MB, significantly larger and probably the version of the PDB file that I needed. The problem was making VC2005 use it. That's the hard part.

First go to Tools/Options, open Debugging, and select Symbols. Add the directory "C:\Windows\Symbols\dll" to the beginning of the list. This is different than how VC6 was configured, which required that you not include the "dll" part of the path.

Click OK. Now close Visual Studio. Go to Task Manager and make sure its gone. Now kill the process MSPDBSRV.EXE, if it's running.

Finally, the critical operation to making all of the other steps work is to remove the smaller copy of mfc80d.pdb from the cache. To do this, delete the directory c:\cache\mfc80d.i386.pdb. The path may be slightly different if you are on a 64-bit system.

At this point you can restart VC2005, load your project, and run your application. In the Modules window, you should see that the symbol file for mfc80d.dll is being loaded from C:\Windows\Symbols\dll.

You may need to tell Visual Studio where the source code is installed. Right-click on a C++ solution and select Properties. Under Common Properties, select Debug Source Files. For Visual Studio 2013, it looks like this on my machine: 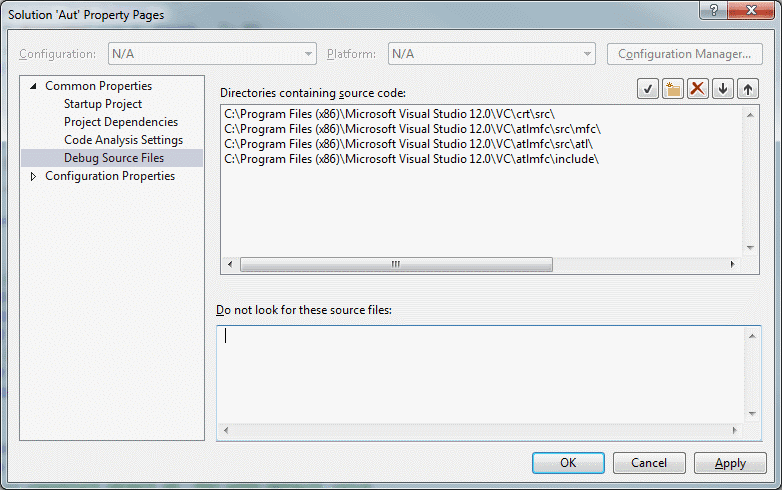